Across the Frisco Bay we found…… (Part 1)

San Francisco was always going to be great stay & it was an absolute highlight already, even though I was dreading the drive into San Francisco Airport Car Rental but TT (Tom Tom GPS) was spot on right to the guy waving us in to the lane.   Worked out the Air-train & the BART (Bay Area Rapid Transit) without a hitch and soon we were on our way to downtown SFC.  Guessed that Powell St would be close and lady luck shone and there we were.   We briefly contemplated the Cable Car & the 3 day pass, but then saw the 50 metre line for the tix & the 150 metre line for the Cable Car, so up the Powell St Hill we walked with bags & guitar in tow.  The last rise made Gaffney St look a little bump but with the afterburners on we made it to the Hotel Cornell de France on Bush St (not George W thank goodness).   Our neighbour was an adult theatre offering to “touch our junk” (I am still not sure what it means but Ann said she would show me later! Still waiting!)

Room was not available so we wandered down & organised our 3 day passports for all the transits and bypassed the cable for the Trams (Trolleys) to fly around the flat ground to the Pier areas.  Lots of people for a Sunday in summer, in holiday season but even the beggars in SFC are polite.   We got ourselves orientated pretty quickly and after some easy lunch on the fly we checked in to our French Provincial recreation Hotel – only 6 floors and an antique cage lift – another good choice Wiseguy.  Went for dinner at Lefty O’Doulls off Union Square & found some stools at the bar & my bald headed buddy Frankie the barman was still on duty and still as sharp as a tack.  Ordered the $10-95 roast sliced fresh off the slab & including salad was a great choice.  Our corner included some Aussies including a newly-wedded couple of girls from Melbourne and their parents from Perth.  # Eagles and a Crows supporter!  Maaaate the bulls..t was soon flying and a great night was had by all. 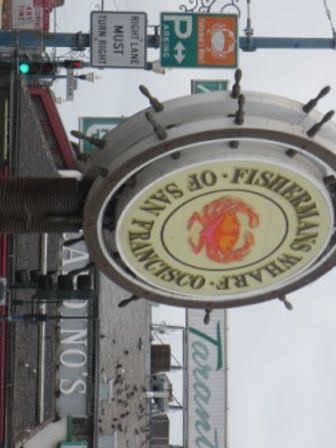 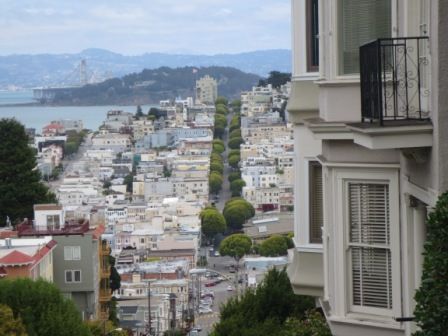 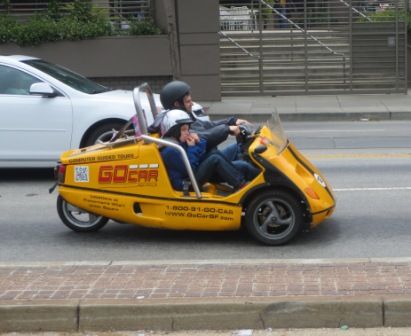 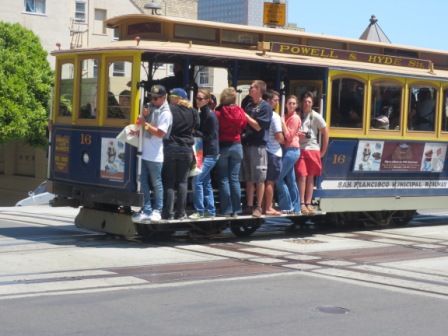